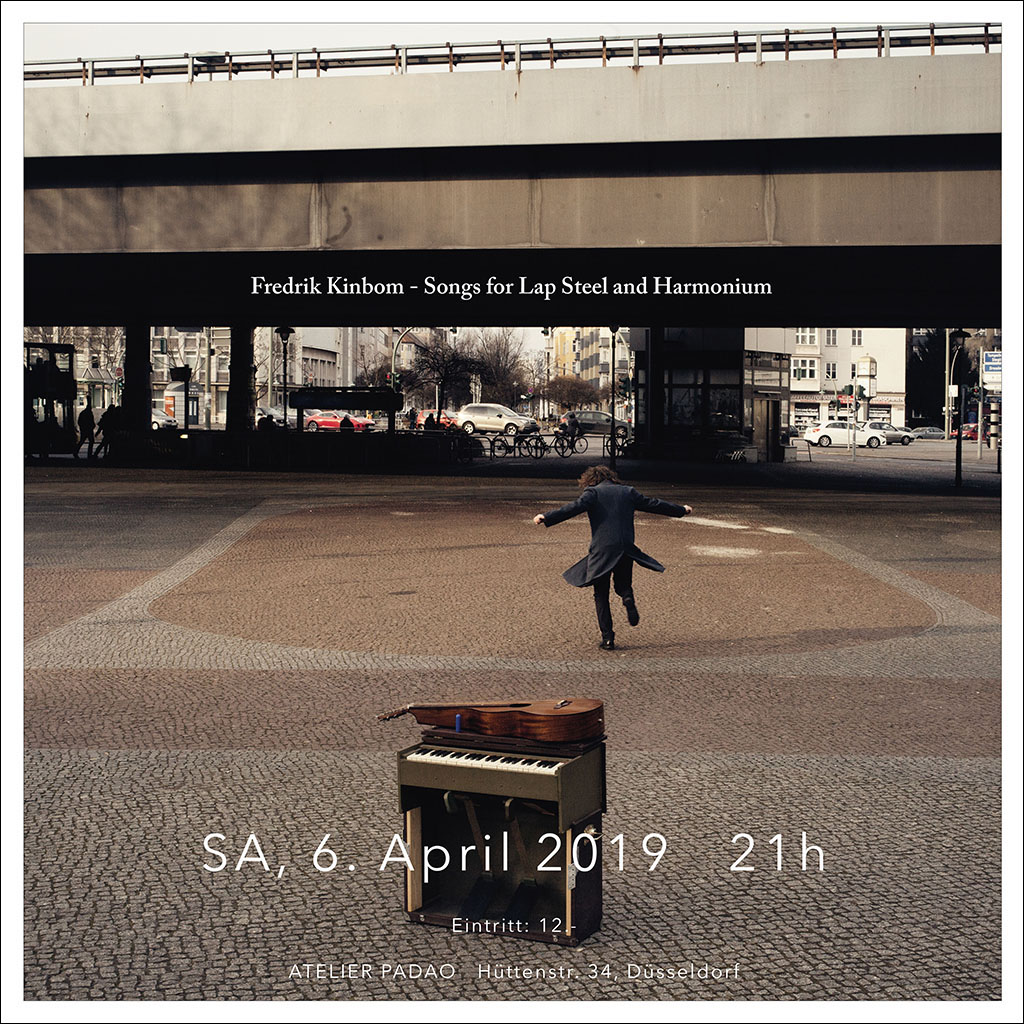 „Oil is amazing and Kinbom’s talent is extraordinary.“ – 4.5/5 stars – Renowned For Sound

„…an artist that has found a sound so unique and contemporary, that it belies comparison to stand on its own as a testament of Kinbom’s artistic creativity. This is a must have.“ – Floorshime Zipper Boots

Since his acclaimed last solo effort Oil (Capstan Records, 2014), Fredrik Kinbom has been busy with other projects – touring extensively with Gemma Ray, Moulettes, Alberta Cross and Ned Collette, as well as releasing two albums with his side project Kinbom & Kessner (one of which featured a guest appearance by none other than James Williamson of Iggy & The Stooges). In the summer of 2017, he felt the time was ripe to concentrate on a new collection of solo songs based around the lap steel guitar, this time around in combination with another rare and evocative instrument – the harmonium. He says about the new album:

„With Songs for Lap Steel and Harmonium I set out to write and record an album where the only instruments accompanying my voice are the lap steel guitar (acoustic and electric) and the harmonium, or pump organ. Both are instruments dear to my heart, and both are sort of on the garbage dump of history (as their respective heydays are long gone). But my music does not look to the past. Nor does it interest me to play the kind of music these instruments are mainly associated with, but rather to tap into their rich textures and combined expressive potential and create my own kind of soundscapes and songs.“

Fredrik spent eight intensive months in his Berlin studio, surrounded by an array of lap steel guitars and three vintage harmoniums (the oldest being more than 110 years old, and the „newest“ a US Army field organ from WWII), writing, exploring and recording. The result is a beautiful, cohesive piece of work and a highly original artistic statement.

NOTES TO THE EDITORAbout Fredrik Kinbom

Fredrik Kinbom is a Swedish lap steel player/multi-instrumentalist/singer/songwriter based in Berlin. Since first picking up the lap steel in 2005, his original style and sound has led to recording and/or international touring with acclaimed acts like Gemma Ray, Gurrumul, Alberta Cross, Moulettes and Ned Collette. His second solo album with the lap steel in focus, Oil(Capstan Records, 2014), received much critical praise. He has contributed as a co-writer to albums by Sarah Blasko and Gemma Ray, and has since Oil released two albums with his theatrical side project Kinbom & Kessner (featuring a stellar cast of guests like James Williamson (Iggy & The Stooges) and members of Moulettes, Hazmat Modine and Augie March).

Fredrik mainly plays the lap steel slide guitar, but the way he plays it sounds nothing like the Hawaiian, blues or country sound most people would associate with the lap steel. He really creates his own sonic universe.

Sotones is an independent co-operative label based in Southampton, England, which was initially established in 2007. Its artists include Avital Raz, Anja McCloskey, Moneytree, Moulettes, Haunted Stereo, Etao Shin, Lonely Joe Parker, Ottersgear and David Miatt amongst others. With over 80 releases in 10 years and artist support tours for The Ting Tings, The Holloways, Mystery Jets and Band of Skulls, the label has come a long way since its inception. SOTONES TEN, featuring Band of Skulls, Moulettes and many more, was released in October 2017 to celebrate the label’s 10-year anniversary. www.sotones.co.uk/news